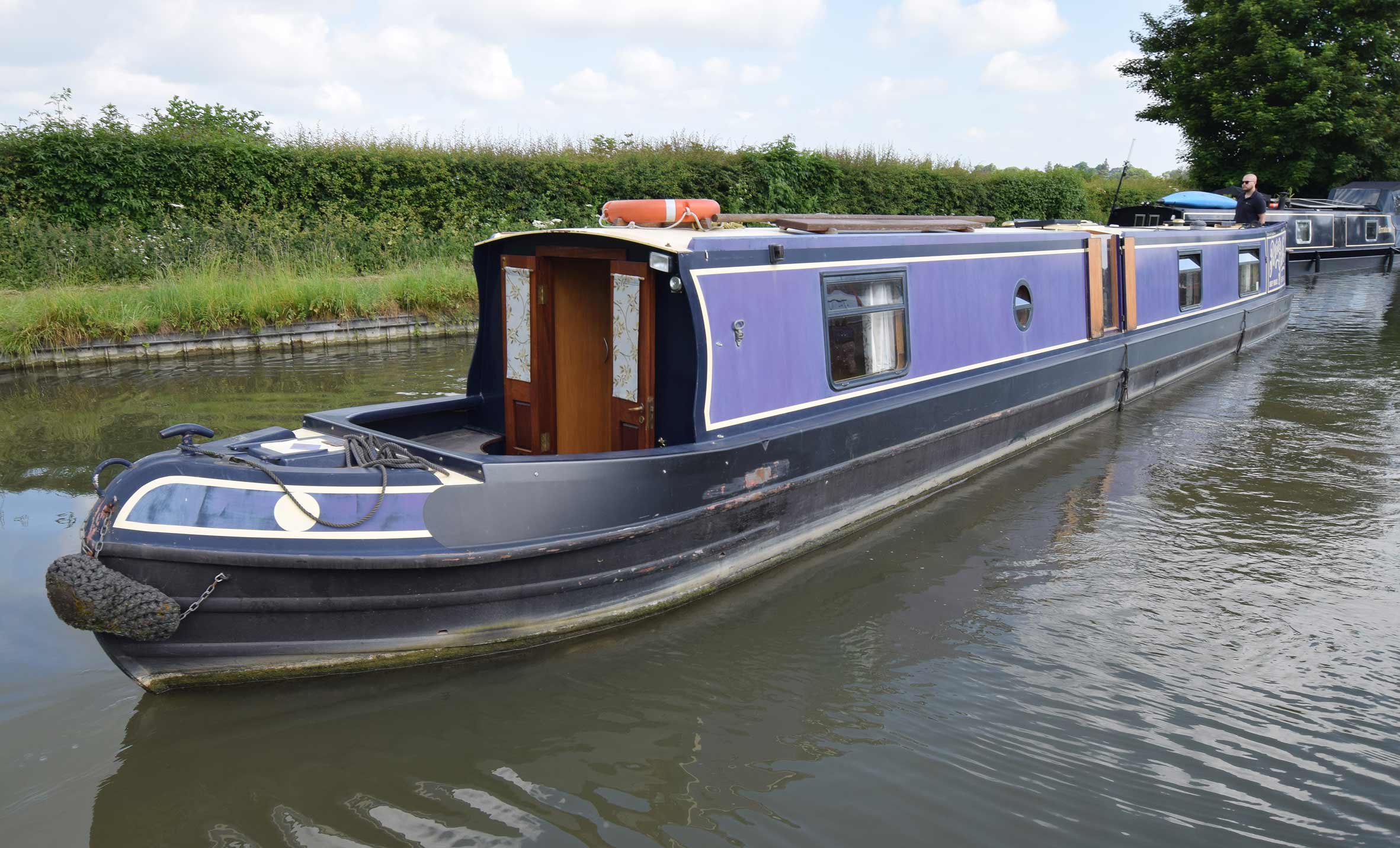 
Pixie’s Gift – 58′ Reverse layout Semi Trad 2004 Reeves / Kate Boats
Pixie’s Gift is a charming 58’ go anywhere size reverse layout Semi Trad built in 2004. The hull was built by Reeves and she was fitted out by Kate Boats.
Both front and rear decks have covers to protect from the elements. We will start at the rear. Under the semi trad deck boards sits the engine. She is propelled by a Beta 43 (with hospital silencer), and navigation is aided by the bowthruster. There are bench seats either side of the rear deck with storage underneath.
Steps lead down into the saloon. This has a couple of armchairs (with a footstool) and there is a Morso solid fuel stove. There is also a TV (with satellite dish and sky box) and a JVC stereo. A couple of cupboards offer storage options, and one houses the 1.8kw inverter for 230v (when not on landline). The hot water tank is in the cupboard on the port side (heated by the engine or the Hurricane diesel fired central heating system).
The Pullman dinette area is next. This turns into a spare double bed and has storage under. There is also a 12v freezer squirreled away under here.
The galley follows. This is 8’ long and utilities comprise of an eye level oven & grill, a four burner gas hob, a 230v larder fridge and a sink with drainer. There is also a space for a microwave and plenty of storage space in the various cupboards.
The bathroom is 6’5” long and has an electric flush Thetford cassette loo, a ceramic basin with cupboards under, and a tiled shower cubicle with glass door and extratorlite over.
The bedroom is in the forward cabin. The bed is a cross bed (storage under) and the room has two wardrobes, one with six good sized shelves in.
Steps lead up into the well deck.
She was last blacked in March 2019, when the engine was also last serviced (although she has been used very little since).
The water tank is stainless steel (680 litres). 12v supply is from the bank of four domestic batteries and 230v from the inverter of landline. She is centrally heated by the Hurricane.
She is a really cosy boat, ready for immediate occupation.
Boat name: Pixie's Gift
Price: £54,950 - SOLD
Length: 58'
Boat type: Semi Trad Narrowboat
Ref: 1885