Types of heating for boats is a much discussed matter, as a skim of relevant internet forums reveals. How and when you use your boat, your boats length, and available spare are all factors you need to consider when deciding on which type of heating you might prefer. Heating systems can be changed, but this can often be expensive, so try and narrow down your boat search a little by looking at different heating options first.

As well as a more traditional stand alone multi fuel or wood burning stove, there are central heating systems, where conventional house style radiators are heated by diesel boilers such as Eberspacher, Webasto, Mikuni and Hurricane. Radiators can also be run from certain stoves with a back boiler connected to it, but you have to get the stove going first. Heat at the flick of a switch will obviously heat your boat quicker, and from a smartphone and wifi on board can even be done remotely, but you just can’t beat a roaring fire in the corner of the room! 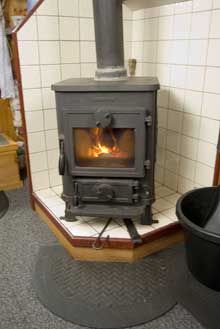 For years the staple source of heat in canal boats has been a multi fuel stove – the Morso Squirrel has been a strong favourite for three decades, not least for the fact that it was designed and built by a Danish company to withstand Scandinavian winters. But there are numerous makes and models, from simple plain metal boxes to ornate enamelled affairs. The attraction of a glowing stove in the saloon is unlikely to diminish, although they do generate a fair amount of dust.

Wood is all well and good, but wood needs to be properly seasoned, which it will not be unless it is kept under cover and dry for some months. Ash and holly are an exception to this – their water content is very low and they can be burnt “green”. Beech needs at least six months, oak a year, and something like willow 3 years, by which time it is light and burns away very quickly – not a good choice of firewood at all. Unseasoned wood is comparable to chucking water on the fire, and it produces a flammable tar which can cause a chimney fire, and leaves a sticky black acidic residue on the roof of the boat around the chimney which will permanently damage the paint finish.

Smokeless coals are readily available from most chandlery and boat yards, but require a little wooden kindling to start the fire first. 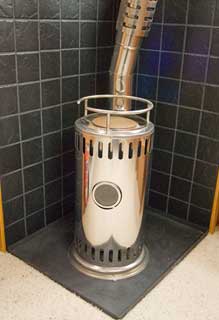 In recent years diesel stoves have found favour with a number of canal boaters. They come in a variety of styles, from ones such as the Kabola Old English which has the appearance of a conventional multi fuel stove to cylindrical stainless steel models such as the Lockgate Refleks model pictured right. Lockgate also do a conversion of the Morso Squirrel. They all work on broadly the same principle – an adjustable valve allows diesel to drip feed at varying rates into the bottom of the fire chamber.

To light them either a small chip of firelighter is placed in the bottom of the chamber, or several capfuls of meths are poured in and ignited. A wire mesh cylinder (called a catalyser) rests on end in the middle and as it heats up, the diesel vaporises and catches alight.

Concerns over the cost of diesel raises questions about the cost of running these stoves but different owners tell you different stories and many claim that the cost is broadly similar to solid fuel. People who have owned boats with both, found diesel to be no more expensive as a means of heating, and you don’t have to hump it around in 25kg bags. 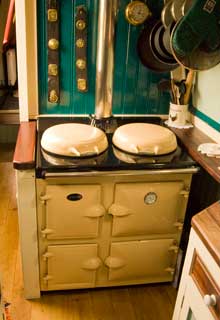 A rather grand if somewhat expensive installation is an Aga style range, providing heating, hot water and cooking all in one. Heritage have made inroads into the boat market with their units. Pictured here is a domestic Sandyford, converted to run 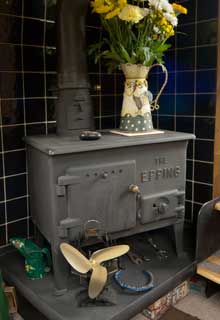 on diesel. Then of course there is the original thing that warmed and cooked for the working boatmen and women (right). These stoves have
been in production in some shape and form for something like two centuries. One of these in a traditional back cabin certainly helps to keep the helmsman of a traditional style narrow boat warm on chilly cruising days.

Until the mid 1990s the boat central heating market was dominated by Alde, whose slimline Comfort gas boilers were ideal in the restricted space of a narrowboat. They work well, seem to require relatively little servicing, but if relied on as the main source of heating prove expensive to run. LPG in small quantities (usually 13kg bottles on a canal boat) is fairly expensive as a constant form of heating.

Since then diesel fired boilers have made considerable inroads into Alde’s market and are far more common in boats these days. Webasto were probably the first to appear but these days the compact Eberspacher and Mikuni units are just as commonly found. Hurricane are reckoned to be a particularly good unit, which is reflected in the price. All these diesel boilers are effective, but may require more regular and fairly expensive servicing. This is particularly true if you don’t run them very frequently. Some people find the low level roar they make when in use intrusive – the older units were especially noisy. Once again, fluctuating oil prices may see the market change. Alde have now introduced an even more compact unit – the 3010 – which they claim to be substantially more efficient than their previous models, but they do state that copper must not be used anywhere in the system, which means that the normal copper calorifier tank (hot water cylinder) used in boats cannot be used. Stainless steel calorifiers may be obtained although they cost more, but one recent installer of this new Alde system noted that it was impressively quiet and seemed to use noticeably less gas.
A simple alternative to this is the addition of a back boiler to a room heater – available for both multi-fuel and diesel stoves if you have the right model. It depends on your use of the boat. For long term use and living aboard this may be a practical option – for occasional boating you may want to be able to get heat at the flick of a switch.